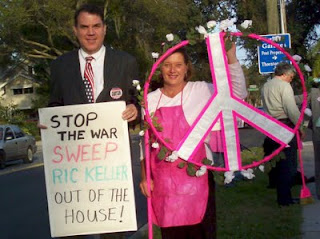 Well...one of his pollsters qualified to run as a Tea Party candidate at the last minute.

One of Rep. Alan Grayson’s pollsters is running for the state House in Florida as a Tea Party candidate, fueling Republican suspicions that the Democratic Congressman is using a newly formed third party to boost his own re-election bid.

On Friday, Victoria Torres, 44, of Orlando qualified to run as a Tea Party candidate in state House district 51 in the last hours of the qualifying period.

A call to Torres was returned by Nick Egoroff, communications director for the Florida Tea Party, who described Torres as a “quasi-paralegal assistant who works in a law office.” But apparently, Torres is also a pollster.

According to records from the Florida Department of State office, Torres incorporated...

They guy is good... Gotta give him that. I hope voters see it for the sham it is.