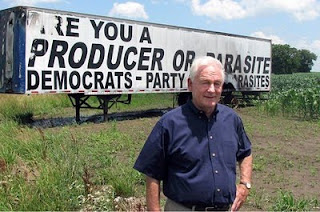 Do you remember when Democrats used to defend free speech? That isn't true anymore. Democrats now want to silence the opposition. We might guess it was some free speech hating Democrat(s) who burnt David Jungerman's semi-truck trailer twice because he had this message painted on the side.

Are you a Producer or Parasite

Democrats - Party of the Parasites

Oh, and they torched his farmhouse too.

So when the 72-year-old Raytown man wanted to speak out politically, he used what he had handy: a 45-foot-long, semi-truck box trailer.

Are you a Producer or Parasite

Democrats - Party of the Parasites

Then flames erupted in an empty farm house that Jungerman owns.

You'd think the fire department would ask to have that hazard to public safety removed already.

If the Democrats are the party of parasites what does that make the Republican's who spent so much of our kids and grandkids money?

Aren't both to blame for the situation we are in?

Time to place some hidden hunting cameras to show the pyros.

Look at how the democrat's comment on this page is anonymous, while republican comments give their names. Oh that's right, we're conservative and stupid. Also so notice how the democrat does not have their facts straight. The American debt has been increased by Obama, equal to what George Bush created in 8 years. It took Obama 2... God Bless Mr. Trailer in the field guy...... You better not let me catch you committing crimes against this man for exercising free speech, or I'll destroy you and your kind. It's the new cival war... And I mean war........

I posted my name... Boy I look like a fool for knocking the anonymous guy --- ha ha -- that's my comment above and my name is Brian Sullivan

ok I screwed up .. I did leave my name above -- print it you fools