Gen. Stanley McChrystal is Now free to Speak His Mind 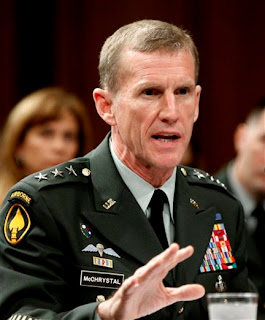 General McChrystal has been relieved of his command and replaced by General Petraeus. I can't wait to see Gen. Stanley McChrystal on Hannity. If he was so plain spoken while in command, he will be brutally honest now.

Obama said bluntly that Gen. Stanley McChrystal's scornful remarks about administration officials in interviews for a magazine article represent conduct that "undermines the civilian control of the military that is at the core of our democratic system."

He fired the commander after summoning him from Afghanistan for a face to face meeting in the Oval Office and named Petraeus, the Central Command chief who was McChrystal's direct boss, to step in.