Possible reason Obama hates the British has been revealed 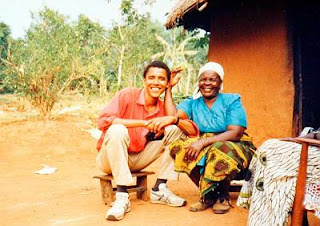 When Barack Obama Jr. was born on Aug. 4,1961, in Honolulu, Kenya was a British colony, still part of the United Kingdom's dwindling empire. As a Kenyan native, Barack Obama Sr. was a British subject whose citizenship status was governed by The British Nationality Act of 1948. That same act governed the status of Obama Sr.'s children:

The Kenyan bowed his head as his captors opened the prison cell door to deliver another brutal whipping - a punishment meted out after he was accused of taking part in the independence movement against the British colonial authorities.

The man had been working as a cook for a British Army officer. And his name? Hussein Onyango Obama - President Barack Obama's paternal grandfather....

'The African warders were instructed by the white soldiers to whip him every morning and evening till he repented,' says Sarah Onyango, Hussein Onyango's third wife, and the woman President Obama calls 'Granny Sarah'.

This week, she told the Mail in an exclusive interview that she believes that learning of the torture meted out to his grandfather turned her grandson, the U.S. President, against Britain. Sitting under a mango tree in the garden of her modest home in Kogelo village, Kenya, surrounded by the family's chickens, cows and goat, she recalls telling Barack Obama his family history on his first visit to Kenya in 1988.

'I narrated the whole story to Barack one evening... Emphasis mine.

this is old news to many of us.

It would take a petty individual to hold something that happened 50 years ago against the British. Of course, we are talking about Obama.