Reverend Wright is Back and He is as Crazy as Ever! 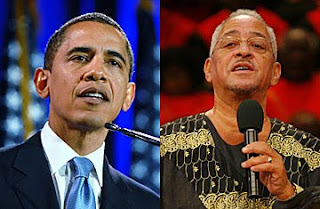 President Obama's favorite reverend is back and he is still crazy.

He's been keeping such a low profile since nearly derailing Barack Obama's campaign for president in 2008 -- is it possible that the controversial Rev. Jeremiah Wright has mellowed?

During a five-day seminar Wright taught last week at the University of Chicago, he was back at it, claiming that whites and Jews are controlling the flow of worldwide information and oppressing blacks in Israel and America.

"White folk done took this country," Wright said. "You're in their home, and they're gonna let you know it."

Ret. Major General Paul E. Vallely has released a petition calling for the immediate resignation of Obama, his administration and all appointees. House Minority Leader, Congressman John Boehner has agreed to present the signed petitions to Congress. http://obamareleaseyourrecords.blogspot.com/2010/06/john-boehner-willing-to-present-obama.html

I agree that "whites" have oppressed blacks in this country...they are Democrats.

"I agree that "whites" have oppressed blacks in this country...they are Democrats."

Ouch! That will leave a mark.