RINO Senator Lindsey Graham is pretty excited over dinner with Obama and other RINO GOP Senators... 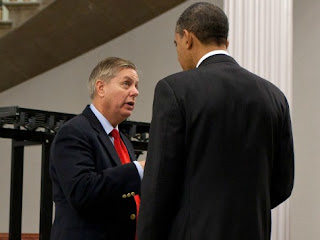 Senator Graham got used like a prostitute at a counterfeiter's convention...

U.S. Senator Lindsey Graham (R-SC) released a statement Thursday boasting about his dinner with Barack Obama. He made the following statement after meeting with the President:

Last night's dinner with President Obama and my Republican colleagues was productive and substantive. I hope it will serve as the beginning of a new, long-overdue paradigm where people in elected office actually begin talking to each other about meaningful issues.