Report: One Boston bomb had female DNA on it... 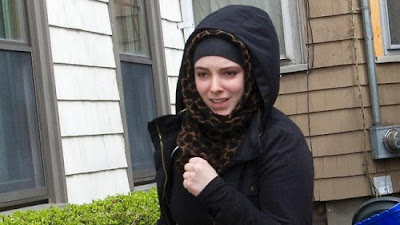 I wonder who that could be?


Investigators have found female DNA on at least one of the bombs used in the Boston Marathon attacks, though they haven’t determined whose DNA it is or whether that means a woman helped the two suspects carry out the attacks, according to U.S. officials briefed on the probe.

The officials familiar with the case cautioned that there could be multiple explanations for why the DNA of someone other than the two bombing suspects—Tamerlan Tsarnaev and his younger brother, Dzhokhar—could have been found on remnants of the exploded devices. The genetic material could have come, for example, from a store clerk who handled materials used in the bombs or a stray hair that ended up in the bomb.

On Monday, Federal Bureau of Investigation agents were seen leaving the Rhode Island home of the parents of Katherine Russell, the widow of Tamerlan Tsarnaev. The elder brother died after a shootout with police four days after the April 15 bombings.

Ms. Russell has been staying with her parents since the bombings, and FBI agents have been seen posted outside the home since her late husband was identified as one of the bombers. Her lawyer has said she is “doing everything she can to assist with the investigation.”