Amusing: NSA spied on den of spies at U.N. 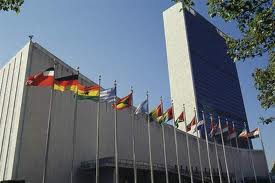 I support this activity of the NSA. They are spying on foreigners who are trying to spy on us.


BERLIN (Reuters) – The U.S. National Security Agency has bugged the United Nations’ New York headquarters, Germany’s Der Spiegel weekly said on Sunday in a report on U.S. spying that could further strain relations between Washington and its allies.
Citing secret U.S. documents obtained by fugitive former intelligence contractor Edward Snowden, Der Spiegel said the files showed how the United States systematically spied on other states and institutions.
Der Spiegel said the European Union and the U.N.’s Vienna-based nuclear watchdog, the International Atomic Energy Agency (IAEA), were among those targeted by U.S. intelligence agents.
In the summer of 2012, NSA experts succeeded in getting into the U.N. video conferencing system and cracking its coding system, according one of the documents cited by Der Spiegel.
“The data traffic gives us internal video teleconferences of the United Nations (yay!),” Der Spiegel quoted one document as saying, adding that within three weeks the number of decoded communications rose to 458 from 12.