Real Good News: The The Muslim Brotherhood is losing in Egypt... 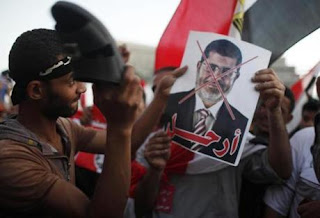 In Middle east conflicts. it's hard to find a good guy. One thing is certain, the Muslim Brotherhood are bad guys.


Cairo, Asharq Al-Awsat—The Muslim Brotherhood’s attempts to organize protests to demand the reinstatement of ousted president Mohamed Mursi on Friday ended quietly as the total number of protesters declined markedly from previous weeks.
The small turnout prompted speculations over a drop in the group’s popularity among Egyptians.
Pro-Mursi protests were met with public condemnation across Egypt, and anti-Brotherhood protesters reportedly attacked Islamists and tore down their placards.
Those overseeing the situation in Egypt attributed the small turnout to the absence of communication among Brotherhood members and protest organizers, as well as the heightened security measures.
Beginning in the early hours of Friday, Egypt’s security forces stepped up their preparations near key locations across the country.
“Security forces tightened security in key institutions and squares, so that what happened last week would not be repeated,” a security source told Asharq Al-Awsat.
“The interior ministry does not object to any protest, providing it is peaceful,” the same source added.
Brotherhood supporters scrambled to find a foothold in Cairo after the Friday prayers, but the security forces closed off the Tahrir and Ramses squares, as well as Rabaa Al-Adawiya, the former Brotherhood stronghold.

The military seem to realize they are winning. they are easing the curfew.


AFP - Egypt is to shorten its night-time curfew by two hours, pushing back the start time to 9:00 pm (1900 GMT) except on Fridays, the premier's office said on Saturday.