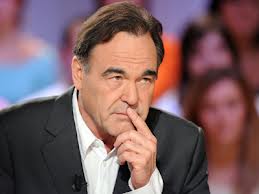 I never thought I would agree with Oliver Stone, but...


Film director Oliver Stone—who has made no secret of his liberal political views—called President Barack Obama a “snake” for his role in National Security Agency spying programs that have become, he said, more about silencing protestors than finding terrorists.

“Obama is a snake,” Stone told an audience in Tokyo on Monday. “He’s a snake. And we have to turn on him.”
Keep on reading…