Texas to have rodeo with Obama masked clown... 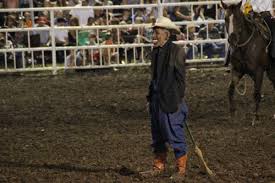 
A Texas rodeo isn’t shying away from controversy — instead, they are doing the opposite and promoting an appearance of a rodeo clown wearing a mask of President Obama this weekend.
“You’ve heard about the controversy surrounding the Obama clown in Missouri,” read an announcement from the Mesquite Rodeo, according to the Dallas Observer.
“This weekend, an Obama clown is a special guest star as the Mesquie Rodeo puts on the grand finale to its 2013 season with non-stop action you will only find in the aptly named ‘Rodeo Capital of Texas,’” the announcement added.
Keep on reading…