Denial: Obama claims, “We don’t have an urgent deficit crisis,” 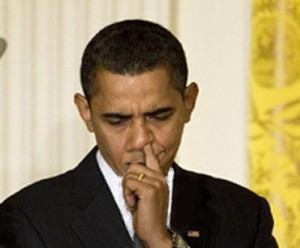 The U.S. is over $16 trillion in debt and adding a trillion a year and national debt isn't urgent? What kind of liberal alternate universe is Obama from?


President Barack Obama said the country isn’t facing a spending or deficit problem, only an ideological problem from Republicans who want to cut government programs for health care and children.
“We don’t have an urgent deficit crisis,” Obama said Friday at a town hall meeting on the campus of Binghamton University in Binghamton, N.Y. “The only crisis we have is the one that is manufactured in Washington and it’s ideological and the basic notion is that we shouldn’t be helping people get health care and we shouldn’t be helping kids who can’t help themselves and whose parents are under resourced, we shouldn’t be helping them get a leg up.”
Keep reading…