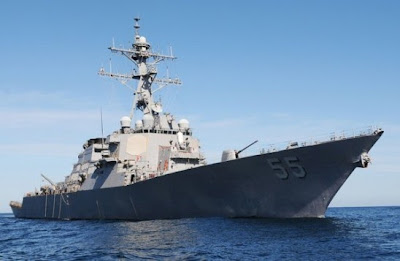 
The Pentagon is moving a fifth warship armed with cruise missiles to the eastern Mediterranean Sea, giving the U.S. more firepower for a possible attack on Syria in response to alleged use of chemical weapons, a defense official said.
The guided-missile destroyer Stout is expected to arrive in the area Thursday, joining four other missile-carrying U.S. destroyers within range of Syria.
Each can carry up to 90 cruise missiles, though experts say they are likely carrying about half that number. Cruise missiles have a range of nearly 1,000 miles, allowing the vessels carrying them to stay well out of range of Syria’s anti-ship missiles, even when they launch the missiles.

You think Obama is planning on launching cruise missile?
Posted by Bluegrass Pundit at 7:34:00 PM