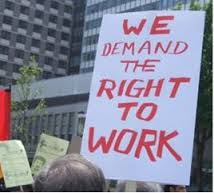 Taxpayers win one in Michigan...


LANSING, Mich. (AP) –  A divided Michigan appeals court ruled Thursday that the state’s right-to-work law applies to 35,000 state employees.
In the first major legal decision on the much-debated, Republican-backed law eight months after its passage, judges voted 2-1 to reject a lawsuit filed by labor unions. The passage of the measure drew thousands of protesters to the state Capitol late last year.
The law prohibits forcing public and private workers in Michigan to pay union dues or fees as a condition of employment, and applies to labor contracts extended or renewed after late March. It went to court after questions were raised whether it applies to state workers, since the Michigan Civil Service Commission, which sets compensation for state employees, has separate powers under the state constitution.
The majority said lawmakers have the authority to pass laws dealing with union fees.

Email ThisBlogThis!Share to TwitterShare to FacebookShare to Pinterest
Labels: 'Right to Work', Michigan