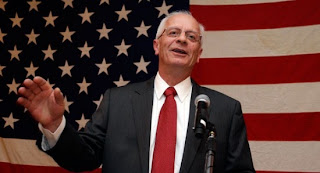 
Rep. Kerry Bentivolio told constituents at a town hall Monday that it would be a “dream come true” to write a bill to impeach President Barack Obama, but so far he doesn’t have enough evidence.
The Michigan Republican answered a question at a local Republican club meeting in Birmingham on Monday from a woman who asked about impeaching Obama and who will “stop this runaway train that we have in the White House.”

“If I could write that bill and submit it, it would be a dream come true,” Bentivolio replied, according to video of the event posted to YouTube on Tuesday.
The congressman said he “can’t stand” Obama, but he respects the office of president.
“I feel your pain, I know. I stood 12 feet away from the guy and listened to him, and I couldn’t stand being there. But because he is president, I have to respect the office, that’s my job,” Bentivolio said.
He told the crowd without evidence of wrongdoing, the person who submits any bill to impeach Obama will be made a “laughingstock” by the press, so he’s consulted with lawyers.


Aug. 14, 2013: The Obama administration delayed the provision in ObamaCare to cap out-of-pocket health care costs, picking and choosing parts of the law to enforce, which is to exceed its authority.
July 17, 2013: The 4th Circuit Court of Appeals joined the federal appeals courts in D.C. and Philadelphia in ruling President Obama’s National Labor Relations Board recess appointments — who by law must be approved by Congress — were unconstitutional. Thus far, the president has ignored the ruling.
July 1, 2013: The Obama administration unilaterally decided to delay the employer mandate provision of ObamaCare for a year, which is to provide information to the feds about the extent of an applicant’s insurance. Never mind that the law states the mandate must go into effect on Jan. 1, 2014 — they are now relying on the “honor system” from applicants to determine if they are qualified for subsidies.
June 25, 2013: The Supreme Court ruled in Shelby County v. Eric Holder that Section 4 of the Voting Rights Act is “unconstitutional” and that “the formula can no longer be used as a basis for subjecting jurisdiction to preclearance.” Instead of complying with the ruling, Holder filed suit to order Texas to submit to preclearance, in defiance of Congress’ authority to legislate and the Supreme Court’s authority to rule on the constitutionality of the law.
June 15, 2012: The Obama administration announced it will stop deporting illegal immigrants under the age of 30 in a “deferred action” policy to circumvent immigration laws. This comes after Congress rejected a similar measure about a year ago. Since then, more than 500,000 illegals have received the deferment and only 20,000 have been rejected. As for the law-abiding applicants who have been waiting in line, well, that’s Obama’s idea of “lawfulness.”
May 20, 2013: A Washington Post article revealed that Fox News reporter James Rosen was investigated by the DOJ, which subpoenaed his phone records and emails in direct contravention of the First Amendment under the pretense of a leak investigation. The other 7 are here...