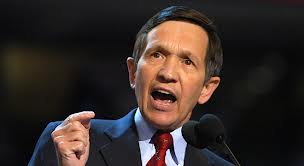 Former congressman Dennis Kucinich is asking this question. Sadly, there are no good guys to support in Syria or much of the Middle East.


Former congressman Dennis Kucinich (D., Ohio) said today that striking Syria would turn the United States military into “al-Qaeda’s air force.”
Kucinich, who voted against the Iraq War and campaigned for the Democratic nomination for president in 2004 and 2008, lambasted the idea that Obama could act without congressional authorization, which he said would be a violation of the Constitution. He also warned that intervening in Syria would entangle the United States in another war in the Middle East and encourage Islamists who are fighting the forces of Syrian president Bashar Assad.
“So what, we’re about to become al-Qaeda’s air force now?” Kucinich sarcastically asked The Hill.
He went on to warn against attempting to “minimize” an intervention by terming it a “targeted strike.” Such a strike, he said, would still constitute an act of war.