Is Obama planning to have Portuguese for dinner? 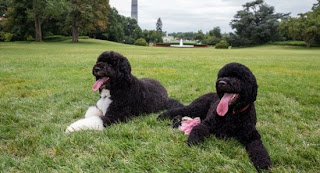 Obama has a second dog. It's a Portuguese Water Dog.


Sunny, welcome to Washington.
The White House revealed Monday that first  dog Bo has been joined by another Portuguese Water Dog, this one named Sunny. Bo was adopted in 2009, shortly after the Obamas moved into the White House.
From the official post:
“Sunny was born in Michigan in June 2012, and arrived at the White House today. Just like Bo, she’s a Portuguese Water Dog, which works great for the Obamas because of allergies in their family. Sunny is the perfect little sister for Bo – full of energy and very affectionate – and the First Family picked her name because it fit her cheerful personality.”