No Thanks: Scott Brown considering run for President... 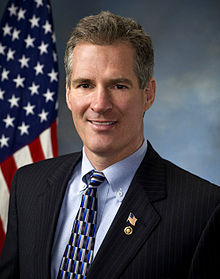 Scott Brown was certainly better than the Democrats in Massachusetts, but he has a RINO streak in him...


Former U.S. Sen. Scott Brown told the Herald he is looking at a possible 2016 presidential bid today as he hit a well-worn stomping ground for Oval Office hopefuls – the Iowa State Fair.
“I want to get an indication of whether there’s even an interest, in Massachusetts and throughout the country, if there’s room for a bi-partisan problem solver,” said Brown, who has been meeting with top Republicans nationally and last week hosted a Fenway event for Republican National Committee members. Brown indicated he isn’t close to deciding whether he will run. “It’s 2013, I think it’s premature, but I am curious. There’s a lot of good name recognition in the Dakotas and here – that’s pretty good.”
Brown rose to national prominence after his surprise win in the 2010 special election for the U.S. Senate over Attorney general Martha Coakley. He lost the seat to U.S. Sen. Elizabeth Warren in 2012, but he has recently kept the door open to many races including the 2014 Bay State gubernatorial and a U.S. Senate bid in New Hampshire.