Fail: UN inspection team will not be allowed to determine "who" used WMD in Syria... 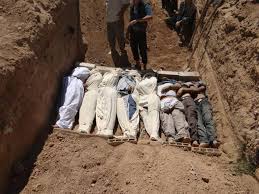 The team will only be allowed to determine if chemical weapons were used. I wonder why the Syrian government doesn't want the UN to investigate who did it?


… On Sunday, the U.N. said its inspection team was preparing to start its fact-finding mission on Monday after Syria said it would allow U.N. personnel now in Damascus immediate access to the affected areas.
“The team must be able to conduct a full, thorough and unimpeded investigation,” said U.N. Secretary-General Ban Ki-moon on Sunday night. However, the team is only mandated to determine if chemical weapons were used, not who used them, Mr. Ban’s spokesman said.
Syrian state television, airing a statement attributed to the Syrian Ministry of Foreign Affairs, said agreement was reached following a meeting between Foreign Minister Walid al-Moallem and Angela Kane, the U.N. disarmament chief, who arrived in Damascus on Saturday. The Syrian statement said the timing of the visit would be coordinated between the U.N. team led by Swedish scientist Ake Sellstrom and the Syrian government.
However, it wasn’t clear how the U.N. team would be able to start the work given the continuing military campaign. All areas in question have been sealed off by the military and strenuous restrictions were imposed at checkpoints.