The 4 State Department officials put on administrative leave over Benghazi are back to work... 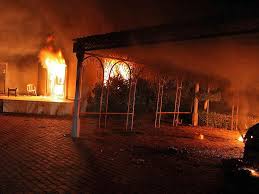 Absolutely no one has been held accountable.


Last December, Clinton’s staff told four mid-level officials to clean out their desks and hand in their badges after the release of the report of its own internal investigation into the Benghazi attack, compiled by the Administrative Review Board led by former State Department official Tom Pickering and former Joint Chiefs Chairman Ret. Adm. Mike Mullen. Those four officials have been in legal and professional limbo, not fired but unable to return to their jobs, for eight months… until today.
Former Deputy Assistant Secretary of State Raymond Maxwell, the only official from the State Department’s Near Eastern Affairs bureau to lose his job over the Benghazi attack, told The Daily Beast Monday he received a memo from the State Department’s human resources department informing him his administrative leave status has been lifted and he should report for duty Tuesday morning.
“No explanation, no briefing, just come back to work. So I will go in tomorrow,” Maxwell said. “I know what Hosni Mubarak must feel.”