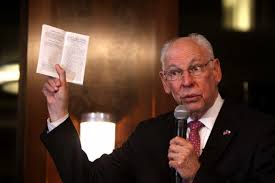 Rafael Cruz is reported to be a powerful speaker...

The political partnership between Senator Ted Cruz of Texas and his father, Rafael, is a rising force in conservative politics. To most observers, it seems like part of a familial game plan that has been in the works for years.
But according to Senator Cruz, it actually began quite recently with a phone call. “My dad poured himself into my Senate race last year,” he recalls. “In the early months, we didn’t have much of a campaign. One day, I couldn’t make an event, so he drove out to West Texas alone — no staffers, nothing — and he spoke on my behalf. A few hours later, I called and asked how it went. He said, ‘Even surrogates for the other candidates were asking for Cruz yard signs.’”
Ever since, Cruz has kept his father, a 74-year-old pastor, involved with his political shop, using him not merely as a confidant and stand-in, but as a special envoy. He is Cruz’s preferred introductory speaker, his best messenger with evangelicals, and his favorite on-air sidekick — a presence who softens his edge. This past Sunday, the pair sat for a joint CNN interview, one full of aw-shucks asides. Read it all...