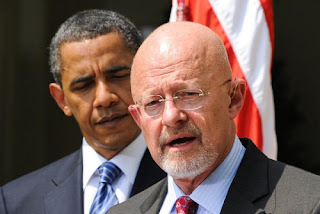 So, Clapper will tell us he fixed every concern the public has and we will be left wondering if he is lying?


On Friday, President Barack Obama promised to appoint an “independent group” of “outside experts” to review the government’s surveillance programs.
Today, the president formally ordered the formation of this group, giving us a sense forjust how independent the group would be. The announcement doesn’t inspire confidence that the president is interested in truly independent scrutiny of the nation’s surveillance programs.
The panel will be chosen by, and report to, Director of National Intelligence James Clapper. Clapper famously answered “no sir” when Sen. Ron Wyden (D-Ore.) asked whether the NSA collects information about millions of Americans. Clapper has since conceded that this answer was “clearly erroneous.”
And there are other signs that the group won’t turn out quite the way the president described it on Friday. Friday’s speech talked about the need for input from outside experts with independent points of view. The president made no mention of the need for outsiders or independent viewpoints in his memo to Clapper.
Keep on reading…