A chilly Arctic summer has left 533,000 more square miles of ocean covered with ice than at the same time last year – an increase of 29 per cent.

The rebound from 2012’s record low comes six years after the BBC reported that global warming would leave the Arctic ice-free in summer by 2013. 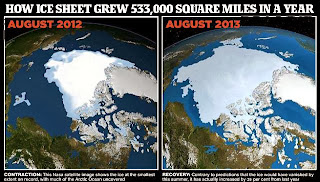 Instead, days before the annual autumn re-freeze is due to begin, an unbroken ice sheet more than half the size of Europe already stretches from the Canadian islands to Russia’s northern shores.

The Northwest Passage from the Atlantic to the Pacific has remained blocked by pack-ice all year. More than 20 yachts that had planned to sail it have been left ice-bound and a cruise ship attempting the route was forced to turn back.

Some eminent scientists now believe the world is heading for a period of cooling that will not end until the middle of this century – a process that would expose computer forecasts of imminent catastrophic warming as dangerously misleading.