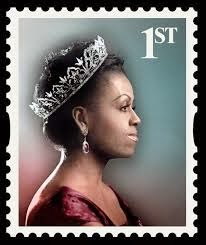 
First Lady Michelle Obama apparently halted private-jet traffic at Aspen airport as she landed for a weekend of skiing while President Obama headed to California.
Michelle, with her daughters, Sasha and Malia, was expected to touch down in Aspen Friday to spend Valentine’s Day and Presidents Day weekend away from her husband, who was meeting late Friday with Jordan’s King Abdullah II in Rancho Mirage, Calif.
Mrs. Obama’s arrival amid tight security was expected to delay the arrival of other wealthy vacationers on private jets at the Colorado ski resort. One source said, “Some of those heading into Aspen were whining that they’re shutting the airport for an hour so nobody can get in on their private jets on a high travel day.” The weather in New York and in Aspen caused further delays. The White House did not get back to us about the first lady’s arrival.
Keep on reading…