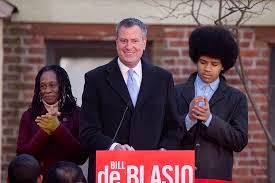 By "allow New York City to tax itself" Blasio means sock it to the wealthy...


For those unfamiliar with New York tax law, the State of New York would have to hike the tax rate on New York City residents. Thankfully, the City Council and the Mayor can’t do it on their own. Cuomo, a liberal with sights on the White House in 2016, wants to appear as a pro-business Democrat. Raising taxes could haunt him now and in 2016. So, Cuomo throws Bill de Blasio a bone and says that he’ll fund universal pre-kindergarten without the tax hike. Sounds pretty reasonable for New York, right? Everyone wins?
Wrong. Bill de Blasio wants to make the rich hurt.

What chutzpah! Allow New York City to tax itself?
Hey, Bill – if “the richest New Yorkers” wanted to pony up more money to pay for your pipe dream of universal pre-kindergarten, they wouldn’t need to do so under penalty of imprisonment.

Don't they already tax themselves? Doesn't the city even have its own income tax?