DHS warns airlines shoe bomber 2 may be on the way... 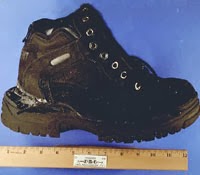 What? The necked scanning machines won't keep us safe?  Let's hope shoe bomber 2 is as inept as shoe bomber 1.

The Department of Homeland Security on Wednesday told airlines about a potential new shoe-bomb threat and urged them to pay extra attention to flights from overseas into the United States.
Several officials familiar with the advisory told NBC News that "very recent intelligence" considered credible warns of possible attempts to attack passenger jets using explosives concealed in shoes.
As a result, officials say, airlines will be playing extra attention to passenger shoes on flights to the US from overseas. Those passengers may also experience increased scrutiny in pat downs and full-body screening.
The bulletin to airlines urges screeners to use the explosive trace detection swabs to check shoes that are worn and in carry-on bags.