Susan Rice: "nobody in the Obama administration intended to mislead the American people" about Benghazi attack 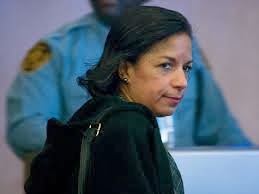 Susan Rice has no credibility and no regrets...


National Security Adviser Susan Rice said Sunday that she has no regrets about her now-infamous round of TV interviews in 2012 about the Benghazi attacks.
Rice, appearing on “Meet the Press,” said that nobody in the Obama administration intended to mislead the American people when she appeared on Fox, ABC, CNN, NBC and CBS in 2012 shortly after the attacks.
Asked by host David Gregory if she had any regrets about those five television interviews she did shortly after the Benghazi attacks, Rice replied: “No.”
“Because what I said to you that morning, and what I did every day since, was to share the best information that we had at the time,” Rice said. “The information I provided, which I explained to you, was what we had at the moment.  It could change.  I commented that this was based on what we knew on that morning, was provided to me and my colleagues, and indeed, to Congress, by the intelligence community.  And that’s been well validated in many different ways since.”
“And that information turned out, in some respects, not to be 100 percent correct.  But the notion that somehow I or anybody else in the administration misled the American people is patently false.  And I think that that’s been amply demonstrated,” Rice said.

Rice's comments are Washingtonspeak for "I lied. The MSM will cover for me. It's amazing how gullible the Sheeple are."