September 2013: Rep. Paul Ryan claims, “Shutting down the government puts us on the wrong side. The fight is on the debt limit.” 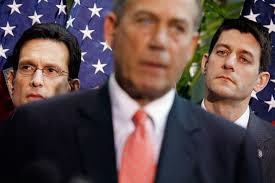 When the Republican leadership caved on funding the government, they told us the real fight would be on the debt ceiling. They caved on it without any fight at all. Republicans need new leaders.


“We go right to the debt-ceiling fight, and that’s where the real battle is, we feel,” said Representative John Fleming. “It’s kind of like the follow-up plan, assuming that [the CR] fails. . . . The real fight will be on the debt ceiling.”
House budget chairman Paul Ryan also urged colleagues to wage the more serious fight over the debt ceiling. “We have to stay on the right side of public opinion,” he told his colleagues. “Shutting down the government puts us on the wrong side. The fight is on the debt limit.”
In exchange for a debt-ceiling increase, Cantor told colleagues, the GOP will issue a litany of demands, including a one-year delay of Obamacare, construction of the Keystone pipeline, an anti-regulatory bill called the REINS Act, and other spending reforms. The exact combination will be negotiated with President Obama and Reid.