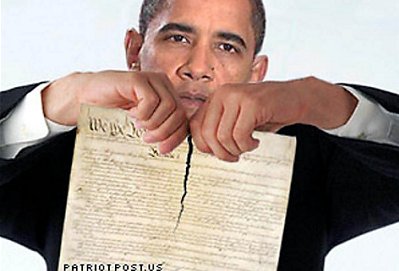 But will anyone do anything about it? GOP leaders in Congress are mostly spineless and the Supreme Court is led by constitutional traitor John Roberts.


The president issued an executive order last week purporting to raise the minimum wage for employees of federal contractors to $10.10 an hour. The order is unconstitutional.
The Supreme Court made clear in Youngstown Sheet and Tube Co. v. Sawyer that “the President’s power, if any, to issue the [executive] order must stem either from an act of Congress or from the Constitution itself.” Furthermore, “when the president takes measures incompatible with the expressed or implied will of Congress, his power is at its lowest ebb, for then he can rely only upon his own constitutional powers minus any constitutional powers of Congress over the matter.”
Nothing in the Constitution grants the president authority to set or raise the minimum wage independently of an act of Congress. Furthermore, although the president generally has authority to improve the efficient discharge of federal contracts, the president’s minimum-wage order is incompatible with the expressed and implied will of Congress.
Congress has made its will regarding the minimum wage for federal contractors abundantly clear in four separate statutes: The Service Contract Act, the Davis Bacon Act, the Walsh-Healey Act, and the Fair Labor Standards Act...
Keep on reading…