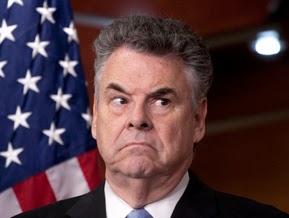 Geez. King's district was redrawn to include more Hispanics. Now, he has changed his tune on immigration reform. RINO's have no core values.


Who says old politicians can’t reinvent themselves, jettison long-held beliefs and emerge from ideological cocoons, fresh as butterflies?
Representative Peter King, who is about to turn 70, showed up on Friday night for a town-hall meeting in a Hispanic corner of his Long Island district. He brought his big smile and pompadour, looking every bit the guy who has been a fixture of Republican politics in suburban New York since the ’70s, but he sounded like someone completely different.
His hosts were mostly Spanish-speaking immigrants, invited by a nonprofit community organization, Make the Road New York. More than 150 people crammed into the room, quieting their babies and cellphones, eager to hear what their “congresista” had to say about immigration reform.
Oil, meet water. Mr. King is a combative right-winger who spent the last decade opposing efforts to reform immigration laws. This night, though, he presented himself as the proud holder of another point of view.
“I’ve had real issues with the whole concept of having a large number of illegal immigrants coming into the country,” he acknowledged. But he also said that he now supported the Republicans’ recently released — and almost immediately shelved — “principles” for immigration reform, including legalization for 11 million people. He said the odds of reform passing the House this year were not good, given the election and the power of the Tea Party to make primaries difficult for immigration moderates. But he made clear that he wished it were otherwise.
What changed?
Mr. King’s heart, maybe. His district, definitely. Mr. King lives in Seaford, hamlet on the South Shore of Long Island that is 95 percent white, and has, for years, solidly represented the interests of the white, conservative middle class. But his redrawn 2nd Congressional District extends east to enfold heavily black and Hispanic enclaves like Brentwood and Central Islip. While Mr. King’s re-election this year seems a lock, 2016 may be harder, and he has been out getting to know his new friends.