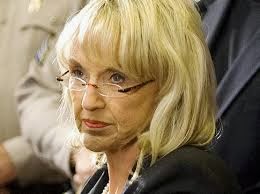 It's a shame Arizona even needs to pass such a law. If the courts had any common sense, this wouldn't be necessary.


If Arizona Gov. Jan Brewer allows a controversial bill letting businesses refuse to serve gay customers to become law, the NFL should consider moving the 2015 Super Bowl, Delaware Gov. Jack Markell said Monday.
“If they pass this law and if she signs it, it would seem to me that the NFL may be looking, or should be looking, to move the Super Bowl out of that state,” Markell said on MSNBC’s new “Ronan Farrow Daily” show. “Because, you know, there’s so many places around the country that are welcoming to everybody.”
Markell was speaking with Farrow from the White House after meeting with the president and other governors in town for the National Governors Association meeting. Also present at the meeting was Brewer, who hasn’t yet said what she will do with the bill, which passed the state Legislature last week. If she doesn’t sign it within five days of its delivery to her office, it will become law automatically.