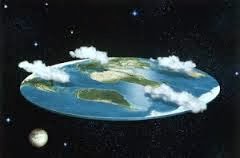 
JAKARTA, Indonesia — Climate change may be the world’s “most fearsome” weapon of mass destruction and urgent global action is needed to combat it, U.S. Secretary of State John Kerry said on Sunday, comparing those who deny its existence or question its causes to people who insist the Earth is flat.
In a speech to Indonesian students, civic leaders and government officials in Jakarta, Kerry laid into climate change skeptics, accusing them of using shoddy science and scientists to delay measures needed to reduce emissions of greenhouse gases at the risk of imperiling the planet. He also went after those who dispute who is responsible for such emissions, arguing that everyone and every country must take responsibility and act immediately.

John Kerry must not know the president of the actual  Flat Earth Society is a global warming believer.


But the Flat Earth Society is a real group, and its president says he believes climate change is real. He also doesn't like being used as an example of backward thinking on the issue.
"For what it's worth, the Flat Earth Society doesn't have an 'official' position on climate change. That falls a bit outside our remit," Flat Earth Soceity President Daniel Shenton told Business Insider in an email from England.
"Personally, though, I believe the evidence available does support the position that climate change is at least partially influenced by human industrialization."

The president of the Flat Earth Society believes in anthropogenic global warming and doesn't want to be used as an example of backward thinking. I am speechless.