Firing 103 rounds and gunning down an innocent elderly lady does not appear to be a suspending offense for police... 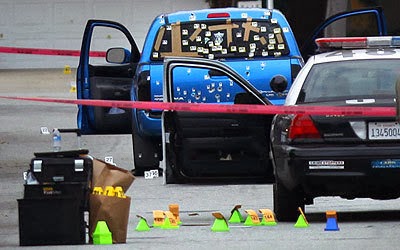 The police were freaked out searching for cop-killer Christopher Dorner. Dorner was reportedly driving a charcoal Nissan Titan pickup truck. The two unarmed women delivering newspapers were driving a blue Toyota Tacoma pickup truck. Police shot at them 103 times. One was shot in the back. They will not be held accountable in any meaningful way. This is why I do not support the police anymore. They are lawless.


A Commission has now completed its investigation of the officers and found that the officers were not at serious fault in trying to kill two innocent unarmed women and unleashing a wall of lead on a vehicle.
The Commission found that the officers did find that eight officers violated Los Angeles Police Department policy. However, a violation that results in gunning down an innocent elderly lady does not appear to be a firing or even suspending act of misconduct.
Chief Charlie Beck insisted that this shooting was simply the result of “a tragic cascade of circumstances that led to an inaccurate conclusion by the officers.”
Of course, these women were hit by 103 “inaccurate conclusions.” Both could easily have been killed but that would not have changed the result.