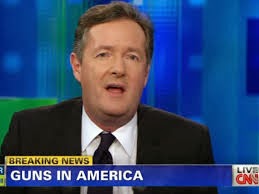 There have been times when the CNN host Piers Morgan didn’t seem to like America very much — and American audiences have been more than willing to return the favor. Three years after taking over for Larry King, Mr. Morgan has seen the ratings for “Piers Morgan Live” hit some new lows, drawing a fraction of viewers compared with competitors at Fox News and MSNBC.
It’s been an unhappy collision between a British television personality who refuses to assimilate — the only football he cares about is round and his lectures on guns were rife with contempt — and a CNN audience that is intrinsically provincial. After all, the people who tune into a cable news network are, by their nature, deeply interested in America.[...]
Crossing an ocean for a replacement for Larry King, who had ratings problems of his own near the end, was probably not a great idea to begin with. For a cable news station like CNN, major stories are like oxygen. When something important or scary happens in America, many of us have an immediate reflex to turn on CNN. When I find Mr. Morgan telling me what it all means, I have a similar reflex to dismiss what he is saying. It is difficult for him to speak credibly on significant American events because, after all, he just got here.
I received a return call from Mr. Morgan and was prepared for an endless argument over my assumptions. Not so. His show, he conceded, was not performing as he had hoped and was nearing its end.