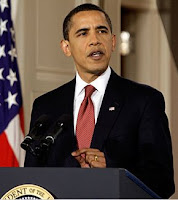 WND reported that the Palestinian Authority has been signaled to ignore Israeli Prime Minister Benjamin Netanyahu's recent major address. According to the report: "We received encouraging signs from the Americans that we should not take seriously into consideration Netanyahu's speech," Hamad said.

– The Palestinian Authority has received signs from the U.S. that it should not take seriously Prime Minister Benjamin Netanyahu's recent major address, according to a top PA official speaking to WND.

During Netanyahu's speech Sunday, the Israeli leader called for a demilitarized Palestinian state and said Jerusalem would always be united under Jewish sovereignty.

Hamad countered: "No matter what is the position of the Israeli government and no matter what are the statements of Netanyahu, what counts is what was promised to us by Obama, which is totally the opposite [of Netanyahu's positions]."