Al Gore Was a Cheater? 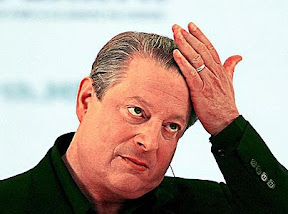 Star magazine is reporting the "Goracle" was having an affair on Tipper with fellow lefty Larry David's ex-wife.

Al Gore’s split from wife Tipper after 40 years of marriage was a shock to everyone who thought theirs was the ideal marriage. Now Star can exclusively reveal that the former Vice President was having an affair with Larry David’s ex-wife — for the past two years!

In the June 28 issue of Star, on sale Wednesday, we report that Al and Tipper’s breakup didn’t come as much of a surprise to one Hollywood player — Laurie David.

Star has learned that Al has been having an affair with Laurie, who divorced Seinfeld creator and Curb Your Enthusiasm star Larry David in 2007...

If this is true, I wonder which of these great pick-up lines Al Gore used?

ruthbourdain: "Baby, all those other guys are unsustainable. Listen, I've got a renewable resource. We can go all night." #gorepickuplines

roboutik : "Do you know how much that dress is contributing to global warming? Cuz you're makin me hot!" #gorepickuplines