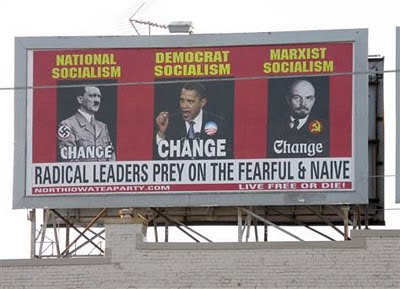 After receiving criticism from tea party members, a billboard comparing President Barack Obama to Adolf Hitler and Vladimir Lenin was taken down Wednesday morning and replaced with a public service announcement.

Kent Beatty, the general manager of the company that owns the billboard, says a North Iowa Tea Party representative called Tuesday night and asked that the sign in downtown Mason City be removed.

They should have compared Obama to Karl Marx, not Adolf Hitler and Vladimir Lenin.

This was so stupid. They just played right into the hands of the media and the left. People only see Hitler as a mass murderer, the majority of people don't know jack about his economic polices.

Score one for civility.

The billboard crossed the line. I'm glad they felt the heat and took it own.