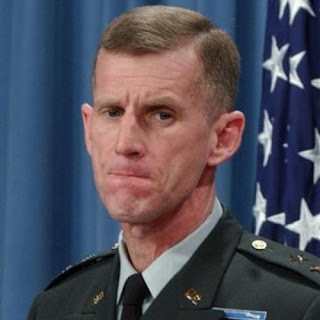 When General McChrystal and some of his aids had their off-the-record conversations betrayed by a Rolling Stone reporter, someone had to take the fall. After all, uncomplimentary things were said and Obama's enormous ego was bruised. General McChrystal manned-up and resigned, but there isn't any reason he shouldn't receive a reward. How does an inflation adjusted $149,700 per year before taxes for life sound? This might keep General McChrystal, who voted for Obama, off FOX News.

“Gen. Stanley McChrystal will retain his four-star rank when he retires from the military, the White House said Tuesday. The decision means the general will earn about $149,700 per year before taxes in military retirement pay.”

Army rules state a four-star general must serve three years before they can retain the rank in retirement. But the president can bypass the rule if he chooses to do so.

Though $149,700 sounds like a generous pension (and is, by absolute standards), most civilian executives, with commensurate responsibility, retire with far larger pensions. There are many places, in this country (perhaps apartments on either side of NYC's Central Park, where the general might not be able to afford to live.