Socialist Party Upset Obama is Being Called a Socialist 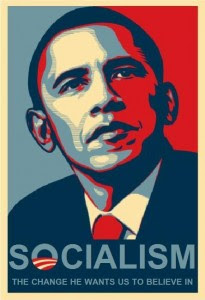 The national director of the Democratic Socialists of America is frustrated people are calling President Obama a Socialist.

"I have been making a living telling people Obama is not a socialist," says Frank Llewellyn, national director of the Democratic Socialists of America. "It's frustrating to see people using our brand to criticize programs that have nothing to do with our brand and are not even working."

Hmm... The DSA backed Barack Obama in the 2008 presidential election. Here is an excerpt from their newsletter, the “Democratic Left” (pdf).

While recognizing the critical limitations of the Obama candidacy and the American political system, DSA believes that the possible election of Senator Obama to the presidency in November represents a potential opening for social and labor movements to generate the critical political momentum necessary to implement a progressive political agenda. We know that a proactive and progressive government can come only on the heels of a broad coalition for social justice united against a reactionary Republicanism as well as a Democratic neo-liberalism. Such a movement will also have to fight for a public finance system that can limit the power of corporate fundraising and lobbyists over both major political parties.

Frank Llewellyn accused President Obama of "programs that have nothing to do with our brand and are not even working." Let's see what programs they proposed in their 2008 newsletter.

Thus, DSA offers its Economic Justice Agenda and its “four pillars” as a framework for such a progressive policy agenda. This program calls for:

1. Restoring progressive taxation to the levels before the Reagan administration and enacting massive cuts in wasteful defense spending;

3. Passing the Employee Free Choice Act as part of a broader effort to rebuild a powerful labor movement capable of achieving equity in the labor market; and

This looks an awful lot like what President Obama has been focusing on since taking office. In the cases where President Obama hasn't fully implemented the DSA agenda, it hasn't been because Obama isn't a true believer. Moderate Democrats have stood in the way of full implementation. You can more learn about Barack Obama's socialist roots here.
Posted by Bluegrass Pundit at 5:53:00 PM

If they seriously objected, they could have simply pointed out that he is not a Socialist because he is unqualified.

Disinformation from the left. You can bet that if the majority of the American public approved of Obama's handling of things, the Socialist Party would be slobbering all over him. Obama's giving them bad press, and they know it.

Which, if they were capable of extrapolating information, they'd realize what idiots they are.