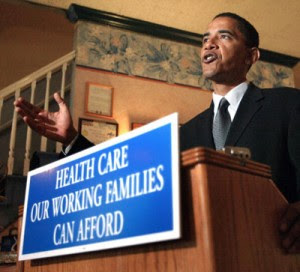 According to this report, President Obama was strongly advised against signing Obamacare. Some senior advisers thought it was insane. Reportedly, President Obama threw our entire health care system under the bus for personal reasons. He thought his dying mother got a raw deal from insurance companies.

….Wolffe writes that Obama was holding back tears when he finally signed the health care bill. He says that it helps answer an important question: why Obama stubbornly insisted on moving forward with the health care overhaul when others advised against it.

“This was clearly a decision that his own chief of staff didn’t agree with, and there were other senior advisers who thought this was insane, lunatic, to risk the presidency on it,” Wolffe says. “And it comes down to the memory of his mother."

A trillion dollar economy turned upside down. Plus, billions of dollars in new taxes and all for personal reasons. We should have known after President Obama made this pro-health care reform ad.

Thanks to his dying mother he left NASA without money and cancelled important space programs. Nice!t