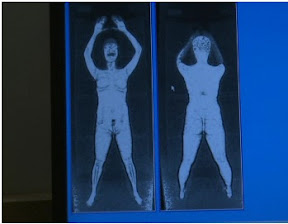 In 2006, a federal appeals court ruled airport security was constitutional. The ruling referred to metal detectors and pat downs for those alarms the machines. What Janet Napolitano's has the TSA doing now goes far beyond that ruling. The 2006 ruling said searches had to be "minimally intrusive." Making fliers virtually naked and groping their "junk" hardly meets that test.

In a 2006 opinion for the U.S. Court of Appeals for the 3rd Circuit, then-Judge Samuel Alito stressed that screening procedures must be both "minimally intrusive" and "effective" - in other words, they must be "well-tailored to protect personal privacy," and they must deliver on their promise of discovering serious threats. Alito upheld the practices at an airport checkpoint where passengers were first screened with walk-through magnetometers and then, if they set off an alarm, with hand-held wands. He wrote that airport searches are reasonable if they escalate "in invasiveness only after a lower level of screening disclose[s] a reason to conduct a more probing search."

As currently used in U.S. airports, the new full-body scanners fail all of Alito's tests.