Attorney General Eric Holder assured us "Failure is not an option" when it came to trials of al Qaeda terrorists on U.S. Soil. In the first test case, a man responsible for helping murder 224 people in bombings of U.S. African embassies in 1998, has been acquitted of 275 of the 276 charges. He was convicted of one relatively minor charge of conspiracy to destroy US property. In an attempt to put some lipstick on this pig, the DOJ claims they are pleased.

Justice Department spokesman Matthew Miller said, "We respect the jury's verdict and are pleased that Ahmed Ghailani now faces a minimum of 20 years in prison and a potential life sentence for his role in the embassy bombings."

By any normal measure, the trial was an abject failure. Jake Tapper Tweeted this. 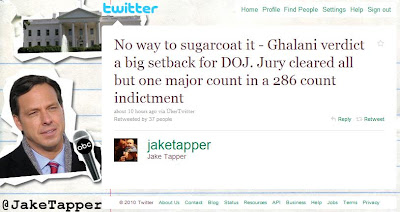 “I am disgusted at the total miscarriage of justice today in Manhattan’s federal civilian court. In a case where Ahmed Khalfan Ghailani was facing 285 criminal counts, including hundreds of murder charges, and where Attorney General Eric Holder assured us that ‘failure is not an option,’ the jury found him guilty on only one count and acquitted him of all other counts including every murder charge.

“This tragic verdict demonstrates the absolute insanity of the Obama Administration’s decision to try al-Qaeda terrorists in civilian courts.