Flier Strips to Underwear at Airport. Gets Arrested for Refusing Pat Down 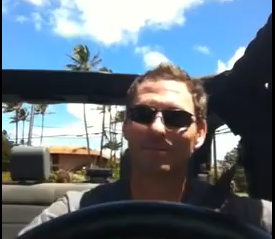 Sam Wolanyk stripped to his underwear after being told to undergo a pat down. In spite of the fact nothing could be hidden in his Calvin Klein bike's, TSA insisted on groping him. He refused and was arrested and paraded through the airport in his underwear. He was charged with failing to complete the security process and recording the San Diego Airport Authority on his iPhone. The TSA is sexually assaulting people and arresting people who try to film it? We are now officially living in a fascist state.

In what can only be described as TSA handlers gone wild, the San Diego Harbor Police arrested an area resident for refusal to complete the screening/security process yesterday. This is the same airport that created the TSA security catch phrase “don’t touch my junk.” John Kliner of San Diego started the airport screening firestorm last week as Americans head into the busiest travel week of the year in the United States.

This time the defendant, Sam Wolanyk says he was asked to pass through the 3-D x-ray machine. When Wolanyk refused, Transportation Security Administration (TSA) personnel told him he would have to be patted down before he could pass through and board his airplane.

Wolanyk said he knew what was coming and took off his pants and shirt, leaving him in Calvin Klein bike undergarments.

“It was obvious that my underwear left nothing to the imagination,” he explained. “But that wasn’t enough for the TSA supervisor who was called to the scene and asked me to put my clothes on so I could be properly patted down.”...