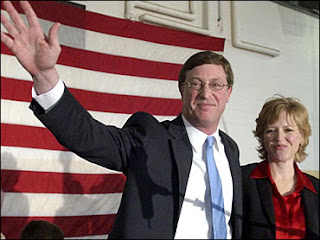 Rep. Ben Chandler barely won re-election. Perhaps this scare has knocked some common sense into him. Chandler previously voted with Pelosi on the Stimulus and Cap-and-Trade, but he broke rank and voted against Obamacare. That vote probably saved his job. It looks like he isn't a Pelosi fan anymore.

(The Hill)- Rep. Ben Chandler (Ky.), who won reelection by only 648 votes, said in a recent interview that he blames outgoing House Speaker Nancy Pelosi (D-Calif.) for Democrats’ deep defeats in the midterms.

Chandler said that the fault also belongs to President Obama, whom he endorsed in 2008...

“It baffles me that you can suffer the largest defeat since 1938 and still maintain the leadership of your caucus,” Chandler said of Pelosi.

How else could Barney Frank and Rangel keep their jobs?