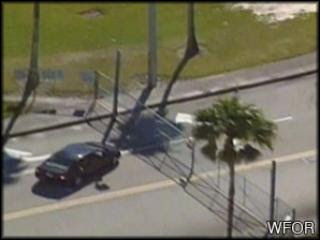 ”if ballots don’t work, bullets will."

That statement was followed by a threatening email and phone call from someone claiming to agree with Kaufman. The threats led to a 300 Florida schools being locked down and caused Kaufman to resign as Allen West's Chief-of-Staff. The woman making the threats has now been identified. She is no Tea Partier at all. She is a lefty member of the Green Part trying to get Kaufman in trouble.

(Palm Beach New Times)- The woman charged by the FBI with making a threat that led to the lockdown of more than 300 Broward County schools after hearing the words of right-wing talker Joyce Kaufman isn’t a member of the Tea Party — she’s a member of the Green Party.

Ellisa Martinez was arrested yesterday for making an emailed threat and a phone call to Kaufman’s radio station, 850-AM, on November 10. In the email, Martinez feigned agreement with the fiery arch-conservative rhetoric of Kaufman and Sarah Palin, but she’s she’s officially on the other side of the ledger. According to the Pasco County Supervisor of Elections Office, Martinez is a member of the Green Party, a progressive left-wing group focused on environmental issues....

The threatening email was sent to Kaufman at the radio station, and Kaufman, a former liberal, has hinted repeatedly that the email was a hoax from a left-wing activist, not a declaration of war from one of her Tea Party adherents.

Over at the liberal Huffington Post, they reported an AP version of the arrest that never mentioned the woman was a lefty Green Party member faking agreement with Kaufman.
Posted by Bluegrass Pundit at 7:22:00 AM