Swedish model wants to see 'real Africa' on Honeymoon. Gets carjacked and murdered. 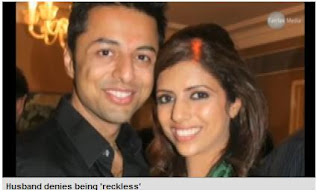 A Swedish model honeymooning in South Africa wanted to see how 'real Africans' live. Her new husband had a taxi take them through a township. They were carjacked and she was shot three times and killed. Her new husband denies they were being reckless...

Shrien Dewani, 31, and his Swedish wife Anni, 28, were carjacked by two men wielding guns while riding in a taxi through Gugulethu township near Cape Town on Saturday.

Mr Dewani was thrown out of the car shortly after, but Mrs Dewani remained with the kidnappers and was found dead in the back seat with three bullet wounds in her chest the next morning.