The Gift That Keep on Giving: Pelosi Elected to Lead House Democrats Again 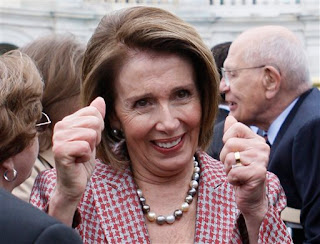 Thanks House Democrats. The GOP really appreciates this. Now, we can finish the Tsunami that started this year in 2012.

Nancy Pelosi has been elected to lead House Democrats in the new Congress despite presiding over the loss of more than 60 House seats in the midterm elections.

The 70-year-old California liberal was opposed by Rep. Heath Shuler of North Carolina in her bid to become minority leader in the new Congress. Shuler argued that Pelosi needed to go after presiding over the loss of the chamber earlier this month.