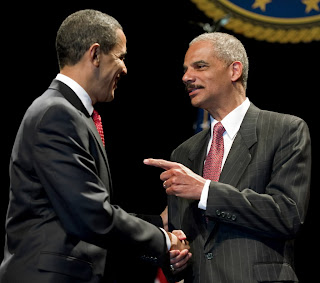 Insanity: doing the same thing over and over again and expecting different results.

The Obama administration remains committed to trying more terrorism suspects in civilian court even though a federal jury acquitted a Tanzanian of all but one charge in the 1998 U.S. embassy bombings, senior Justice Department officials said Thursday.

Alleged Al Qaeda accomplice Ahmed Khalfan Ghailani, the first Guantanamo Bay prisoner to be tried in civilian court, was convicted Wednesday of one count of conspiracy to damage or destroy U.S. property but cleared of 284 counts of murder and attempted murder.

oops, where do we get the money? Hey play nice, do you think the Republicans will fund the trials?