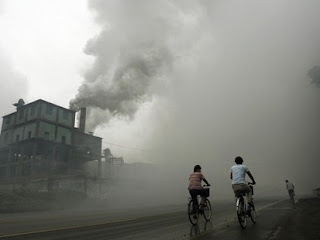 Everyone blames the U.S. for rising global CO2 emissions, but the truth is China surpassed the U.S. three or four years ago and became the world's largest greenhouse gas producer. China has now admitted this truth and they have a message for those who want them to cut back. It's "go pound sand.' They are going to keep increasing their emissions.

BEIJING (Reuters) – China acknowledged on Tuesday it is the world’s biggest emitter of greenhouse gases stoking global warming, confirming what scientists have said for years but defending its right to keep growing emissions.

China’s chief negotiator in international climate change talks, Xie Zhenhua, made the comment while spelling out his government’s position ahead of negotiations in Cancun, Mexico, from November 29 over a new global pact to fight global warming.

Scientists and overseas bodies have said that since 2006-2007, China’s greenhouse gas pollution has surpassed the United States’, the world’s top emitter for the 20th century.

I know, but this picture is worth a thousand words and reminds one of the time when we were a super power.......factories and jobs

(...)Performance culture is increased by adding carbon recovered in the boiler room. This gas is led by a system of plastic pipes in greenhouses and disseminated by porous tubes arranged on the ground. The rate of carbon dioxide air is 300 PPM. As soon as it is Sun, the quantities taken by plants is such that rate drops to 80 PPM. Recovering this gas from combustion emissions rates can rise 400 to 2000 PPM, ideal for a good growth of 700 PPM.(...)

The gazcarbonique is necessary for the development of the nature.