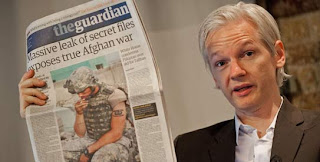 Our government must be run by the insane. They have seized dozens of domain names recently for copyright and other violations. What do they do to a site leaking state secrets and jeopardizing American lives? They send them a nice letter asking them to stop.

I am writing in response to your 26 November 2010 letter to U.S. Ambassador Louis B. Susman regarding your intention to again publish on your WikiLeaks site what you claim to be classified U.S. Government documents.

As you know, if any of the materials you intend to publish were provided by any government officials, or any intermediary without proper authorization, they were provided in violation of U.S. law and without regard for the grave consequences of this action. As long as WikiLeaks holds such material, the violation of the law is ongoing.

It is our understanding from conversations with representatives from The New York Times, The Guardian and Der Spiegel, that WikiLeaks also has provided approximately 250,000 documents to each of them for publication, furthering the illegal dissemination of classified documents.

Publication of documents of this nature at a minimum would:

* Place at risk the lives of countless innocent individuals — from journalists to human rights activists and bloggers to soldiers to individuals providing information to further peace and security;

* Place at risk on-going military operations, including operations to stop terrorists, traffickers in human beings and illicit arms, violent criminal enterprises and other actors that threaten global security; and,

In your letter, you say you want — consistent with your goal of “maximum disclosure” — information regarding individuals who may be “at significant risk of harm” because of your actions.

Despite your stated desire to protect those lives, you have done the opposite and endangered the lives of countless individuals. You have undermined your stated objective by disseminating this material widely, without redaction, and without regard to the security and sanctity of the lives your actions endanger. We will not engage in a negotiation regarding the further release or dissemination of illegally obtained U.S. Government classified materials. If you are genuinely interested in seeking to stop the damage from your actions, you should: 1) ensure WikiLeaks ceases publishing any and all such materials; 2) ensure WikiLeaks returns any and all classified U.S. Government material in its possession; and 3) remove and destroy all records of this material from WikiLeaks’ databases.

Sincerely,
(The letter is signed by Harold Hongju Koh, legal adviser to the State Department)

They claim releasing this top secret information puts lives in danger, but I can't see anything but more lives saved than put in danger by it.

(...) Despite your stated desire to protect those lives, you have done the opposite and endangered the lives of countless individuals (...). Endangering of thousands of scammers who murdered every day!